Despite being little more than a weed, marijuana is an extremely complex and versatile plant, so we’ll forgive the newcomer or armchair enthusiast for being unable to identify different breeds and varieties by sight alone. Regardless of your personal relationship with cannabis, it isn’t necessary to know the difference between a Kush and a Skunk. A little knowledge goes a long way, though, if only to have something interesting to discuss among friends. Below, we’ll share some tips on how to identify your marijuana plants at a glance.

Indica vs Sativa vs Ruderalis

Here’s a question for you – how many types of marijuana are there? If you answered three, ding ding ding! You’re correct. While there are literally hundreds of marijuana strains, they all descend from one (or a combination) of three main species: cannabis indica, cannabis sativa, and cannabis ruderalis.

What’s the difference? From effect upon consumption to the physical structure and chemical makeup, quite a bit, actually. Let’s take a look.

The cannabis community has been poking around with genetics for decades now, and despite being popular in their own right, it’s relatively difficult to get your hands on “landrace” marijuana. seeds. Landrace refers to those marijuana strains that occur naturally in a single area and have not been cross-bred with any other strain. Back in the 60s and 70s, landrace marijuana strains were the only ones available on the market, but since then, breeders across the world have tinkered and toyed with different combinations, producing marijuana strains to suit every palate and need.

Knowing what you know now, you’ll also be able to determine whether your plant genetics are dominated by indica or sativa based on their unique physical characteristics – talk about a cool party trick!

Plant these landrace marijuana seeds in your garden:

There was once a time when marijuana gardeners would eagerly germinate marijuana seeds and patiently wait days and weeks and months for their precious beans to develop into fully budding cannabis plants. Imagine their disappointment when, after the investment of all that time and money (marijuana seeds do not come cheap), they end up with plants that don’t produce smokable buds (male) or their few female plants are pollinated by an errant male and start channeling energy into seed production and not the dense and resin-covered colas of their dreams.

Thankfully, would-be growers of today are entering the fray at a time when cannabis consumers are demanding better quality and service from seed providers, and ordering online isn’t quite the game of Russin roulette it once was, but if you find yourself faced with a mixed bag, so to speak, you’ll be able to figure out pretty quickly once your seedling starts to take shape. 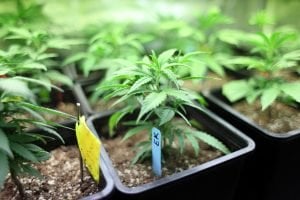 Marijuana plants are dioecious, meaning they produce either male or female reproductive organs. Usually, by around the sixth week of the vegetative phase, you should be able to determine the sex of your plants by examining their “pre-flowers”: reproductive organs located between the nodes of the plant (where the leaves and branches connect with the stalk). Male plants will start with a pollen sac that will eventually spread pollen, and female plants have a stigma that will “catch” pollen released by males.

The pollination process works wonders for breeders who are interested in cross-pollinating different strains to produce something new, but for the average gardener just looking to maximize the return on their investment, it’s important to separate out any male plants before things get a little too familiar.

First of all, removing male plants from the grow space allows your female plants more room to grow and stretch their wings so to speak.

Second, when a male plant pollinates a female, some of the energy that would normally go towards beefing up a seedless cola (or sensimilla) where all that cannabis-rich residue is formed, is diverted to seed production. Buds of female plants that seed tend to be smaller, and are considered lower quality: when marijuana seeds are present in a smoke, the flavor is often unpleasant.

Fact: It’s impossible to discern whether the marijuana seed in your hand is going to have balls when it grows up, but you can order feminized varieties of your favorite strains from reputable dealers like Pacific Seed Bank, which guarantees that your seed order will produce feminized plants.

Now you’re armed with some important information about your cannabis garden, but you don’t have to play any guessing games when you shop online with Pacific Seed Bank – every order is accompanied by detailed strain information, and you’re likely to find your favorites in feminized and autoflowering form.