It’s long been a stereotype that stoners are obsessed with snacks, and this has everything to do with the fact that, when consumed, marijuana triggers something in the brain that makes you want to eat. This can be a good thing or a bad thing, depending on how you look at it.

Marijuana and the Munchies

Either you or someone you know has experienced it: hit a toke and before you know it you’re ravenous, scouring the kitchen cupboards for a snack to fill the void. What gives?

For those who don’t know, marijuana works like a charm for human beings because the chemicals, better known as cannabinoids, that occur when plant material is combusted (a process called decarboxylation) and consumed closely mimic neurotransmitters created by our body and taken up by our endocannabinoid system (ECS). Our ECS is responsible for maintaining homeostasis – regulating normal functions like mood (happiness), sleep, memory, and hunger.

Is it starting to make sense now?

Tetrahydrocannabinol (THC) may be a potent hallucinogenic, but it’s also responsible for that insatiable hunger, and there’s some interesting science behind it. Studies have shown that when cannabinoids like THC are administered to animal subjects, a set of neurons in the hypothalamus known as POMCs are hyper-stimulated. POMCs secrete a chemical called alpha-melanocyte-stimulating hormone (alpha-MSH), which is believed to play a role in whether you feel full or not. In the presence of THC, POMCs were seen to release beta-endorphins, a chemical responsible for stimulating appetite and promoting cravings, among other things.

If the term “beta-endorphins” sounds familiar, that’s likely because you’ve heard it many times before. Beta-endorphins are neurotransmitters produced by the pituitary gland. They have some control over emotions but are also known to be powerful pain suppressors, even stronger than morphine.

Marijuana and Your Appetite

Flooding your system with cannabinoids will cause hyper-stimulation of chemicals that result in that empty feeling in the pit of your stomach. Despite the fear that you might take your snack cravings a little overboard (which may affect your waist size), the munchies aren’t always considered a bad thing.

Even though there’s plenty of evidence to the contrary, marijuana is often considered a viable and effective medical treatment, and has been prescribed as such for decades, though it’s only recently that it has begun to get the widespread legal recognition it deserves.

For patients undergoing chemotherapy treatments, in some cases marijuana has been a godsend, by stimulating their appetites in order to help them gain weight and maintain the necessary strength to continue this considerably harsh form of therapy.

The same can be said for patients suffering from Wasting Syndrome or eating disorders like anorexia. 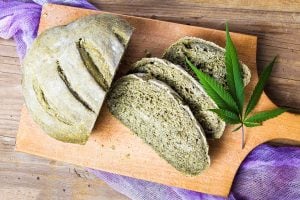 A foodie worth their weight in salt knows there’s little that can improve the quality of their favorite dish, but trying treats while high on weed can, indeed, increase your enjoyment of the food.

Since it appears that cannabinoids like THC facilitate either the release or uptake of beta-endorphins, which trigger the body’s natural pleasure response, with both food and marijuana releasing these chemicals, it’s a logical conclusion that you’re, in essence, doubling your pleasure. Of course, this principle only seems to refer to foods that are sweet or fatty, and not a handful of say, healthy vegetables.

How to Watch Your Weight on Weed

Of course, not everyone is interested in packing on the inevitable pounds from evening or late-night snack binges, and there are definitely a few things you can do to help mitigate the numbers rising on the scale.