Have you ever dreamed about living in Hollywood? How about Hollyweed? Now, that sounds better. Marijuana and movies have a long history together. Surely, it’s not a coincidence that the birth of modern cinema happened around the same time as the first marijuana-related criminalization by the US government. It’s because of this ironic correlation that marijuana-based movies started out as horror flicks. That’s right, marijuana was once used to strike fear in audiences’ hearts. It wasn’t until the 80s that marijuana finally cleared its name in theaters. You’ll see what we mean in a sec.

Let’s just come right out and say it — the 30s, 40s, and 50s were not a good time for marijuana. The biggest standout movie from those three decades is Reefer Madness, said to be a propaganda film about the negative and oh-so-horrifying effects of marijuana. Nowadays, it’s fair to call Reefer Madness absurd and absolutely over-the-top in dramatics.

The plotline follows a group of high school studies who are lured by pushers to try marijuana. This incident then spirals into a hit-and-run accident, manslaughter, suicide, attempted rape, hallucinations, and a general descent into madness. All because of a few hits of weed, which the film labels “marijuana addiction.” Reefer Madness aired in 1936 and essentially gave birth to marijuana content in movies.

Reefer Madness most certainly did not stand alone in anti-marijuana messages. Assassin Of Youth, released a year later in 1937, told the story of a journalist who infiltrates a youth gang of marijuana dealers. In states like Colorado and Washington, the concept of a marijuana dealer is long gone thanks to dispensaries at every main intersection, but it’s ironic to think that some places still have consumers buying marijuana illegally through friends and acquaintances. Other anti-marijuana movies include…

Thank goodness for the hippies. Who knows where marijuana and movies would be without the counterculture movement of the 60s? It was during this time that love and experimentation were in the air, particularly with sex and drugs. The youth of the 60s were sick and tired of seeing such negative messages everywhere over something that seemed like a hell of a good time. Don’t knock it ’till you try it, right?

Easy Rider is a classic counterculture movie of the 60s that introduced marijuana in a positive light. Shortly after, marijuana use was popping up in documentaries, literature, and so-called “music videos.” Charles Bukowski and Hunter Thompson glorified marijuana in their works. The 60s was a rebellious time when it was cool to push the envelope, stick it to the man, and live slightly dangerously. Let’s not forget something, though, counterculture films were not the norm and marijuana was still something you could go to jail for.

Warnings About Marijuana Use 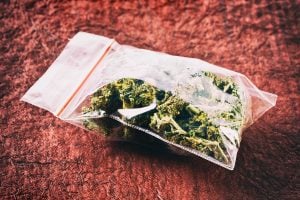 Just as times were looking up, the 70s happened. Marijuana, and all drugs for that matter, went back to being demonized on-screen, and the consequences for using were direr than over. Take a look at Midnight Express, a movie about an American student getting caught for smuggling hash out of Istanbul and ending up in prison. Then there’s Death Drug (the name says it all, doesn’t it?), about a PCP-induced hallucination in a supermarket. Drugs were being shown on-screen left and right, and even though most messages were negative, the popularity and conversation of marijuana were on the rise.

Since everybody kept talking about marijuana, the government felt it was their duty to put out unbiased warnings and safety regulations. They figured people would eventually try marijuana for themselves and stop listening to what movies were saying. An interesting example of this is in the movie Taking Off from 1971. It portrayed a group of conversation middle-class parents who are shown how to smoke marijuana for the first time.

“This is a joint…After you inhale, you take the joint and you pass it to the person sitting next to you. Do not — repeat — do not hold onto the joint. This is called bogarting the joint and is very rude.”

In Taking Off, marijuana is depicted as something both naughty and pleasant. Isn’t that the case with most things, though?

Okay, finally we’re getting to the good stuff! Marijuana was finally able to squash its negative stigma. Well, partially at least. Marijuana was very much characterized as something the cool and quirky kids did, along with the loners of the group. If you’ve ever seen The Breakfast Club (1985), you know what we’re talking about. Then, in 1998, Hunter Thompson’s book Fear and Loathing In Las Vegas was finally turned into a film. This release marked the modern portrayal of marijuana in movies.

You know those people who claim marijuana is a gateway drug? That nightmare was still alive and well in the 90s and early 2000s. As the new century dawned, marijuana and drug use in cinema split into two different directions. The first revolved around serious drug addiction with extreme mental and health consequences — see Trainspotting (1996), Requiem For A Dream (2000), Enter The Void (2009). You may never want to touch drugs ever again after watching these.

On the other hand, light-hearted movies such as The Big Lebowski and Dazed and Confused painted marijuana use as relaxing, chill, and something to do when you’re bored with no real consequences. Marijuana was suddenly comical as opposed to life-threatening. These films introduced the stoner/slacker stereotype into marijuana. Ergo, all smokers were lazy, dumb, and lacked any sort of motivation to live in the real world with 9-5 jobs.

After Colorado’s marijuana legalization in 2014, marijuana and movies were joined at the hip. You couldn’t have one without the other. What happened in Colorado really calmed audiences down. Even conservatives thought, “Hey, if the government approved it, it must not be so bad.” Movies like Saving Grace (2000), Super High Me (2007), and Pineapple Express (2008) really drive that prospective home.