If you’re thinking the title of this article is doing a great imitation of an oxymoron, you wouldn’t be wrong – since when have stoners worried about their fitness? We hope you’re surprised, however, to learn that there is a growing number of professional and recreational athletes turning to marijuana for its healing powers.

The Many Faces of Medical Cannabis

That marijuana can be used to treat serious conditions ranging from debilitating epilepsy to cancer has widely been reported on, and we know that cannabis is a superior analgesic, even being considered as an alternative to opioid medications like morphine and codeine (for obvious reasons).

It’s hard to believe that cannabis could be good for anything other than lulling you into deep seated relaxation (one of the major selling points for the medical community), but these superior pain relieving properties seem to be what makes marijuana an attractive option for folks in sporting professions, and with options to ingest that don’t involve smoking, athletes don’t have to worry about causing the kind of damage to their lungs and respiratory system that would hamper their performance.

There are even a handful of jock-types who believe that THC and CBD are just as effective performance enhancing drugs, thanks to their ability to reduce stress and anxiety and increase the pain threshold, which may allow for an athlete to push themselves harder for longer.

Are these claims just the fevered dreams of pot proponents, or do they have real merit?

What Happens to Your Body When You Use Marijuana

Because science, we know that cannabinoids bind to receptors throughout the brain and body (THC with CB1 and 2, while CBD does not interact with receptors, rather it is responsible for encouraging the active uptake of existing neurotransmitters) to affect homeostasis – normal functions like appetite, pain, immune function, stress reactivity, hormones, memory, hunger, and muscle and fat tissue signalling.

Patients have been turning to marijuana for decades for its ability to provide relief from pain both chronic and acute, as well as to reduce inflammation, relieve stress, anxiety, depression and other disorders related to mental health, as well as improve appetite when undergoing chemotherapy treatments, cause apoptosis (cellular death) in certain cancer cells, reduce the number of severe and debilitating seizures experienced by a person, and more.

We also know that pot can and will reduce a person’s reaction time, one of the reasons it’s never advisable to smoke and then drive or engage in any kind of activity that requires your full concentration.

A Moment of Science: Recent studies suggest that the cognitive impairment associated with marijuana is a result of blood flow being diverted from the temporal lobe, an area necessary for focused tasks. Alternatively, marijuana was shown to increase the blood flow to other areas of the brain, including the frontal lobe and lateral cerebellum, regions associated with decision making, sensory perception, and emotion.

Though common sense would dictate that marijuana before the big game might hinder a person’s ability to perform at their peak, behavioural studies suggest that only complicated tasks are impaired, meaning that athletes performing repetitive or physically grueling activities may benefit greatly from marijuana strains  that are known to reduce the sensation of pain, improve creativity, and boost focus when taken in small or measured doses, as with the practice of microdosing.

The Bad and the Ugly

Of course, there are drawbacks associated with consuming marijuana before a workout, and they aren’t all related to causing damage to your lungs.

It’s a fact that marijuana can increase heart rate, blood pressure, and subsequently a person’s risk for heart attack. These results are normally dependant on the dose – the more you take, the greater your risk of causing harm to your cardiovascular system. If you are at risk for heart disease or stroke, you may want to consider steering clear of reefer, just to be on the safe side.

Ganja to Get You into the Zone

You’ve probably heard athletes talk about “the zone”, that moment when they’re so focused it’s like they’ve become one with the ball and the net (etc…). For some people, marijuana can help grant access to this “flow” state, which may come in handy for someone doing repetitive tasks like weight lifting or simple cardio, or help you keep focused on the specific muscle group you’re targeting during a workout. 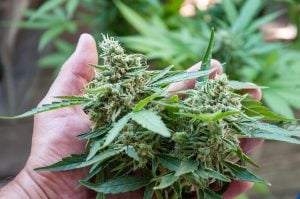 If patients in hospital can treat their conditions with marijuana, doesn’t it make sense that athletes on the mend should be able to find some therapeutic assistance in the form of pot?

CBD, the non-psychoactive compound, is well known for its therapeutic effects sans trippy hallucinations, and in addition to its analgesic properties, has been shown to enhance immune system function, dampen muscle spasticity and seizures (beneficial for patients with seizures), decrease inflammation, and speed up healing and recovery. It’s often prescribed for muscle and joint pain, and a topical solution may be just the ticket after a heavy sesh.

When Will I Feel High?

Did you know that, when smoked, the effects of marijuana are experienced almost instantly? When smoked or vaped, cannabis effects are usually felt within 3-10 minutes, where consumption of cannabis orally – as with edibles, tinctures, or pills – will provide the desired effect somewhere between 20 minutes to upwards of four hours.

When taken orally, cannabinoids must be broken down in the liver in order to pass through the blood/brain barrier. We’ll also point out here that when you eat weed you’re more likely to experience a stronger, more longer lasting high, since THC is converted into 11-hydroxy-THC in the liver in high quantities. On average, a person may have 5% 11-hydroxy-TH in their system after smoking, but anywhere from 25-300% when consumed orally.

Do You Even Vape, Bro?

Traditionally, marijuana was consumed by burning the plant material, and we know now that this process of combustion not only releases the sweet, sweet cannabinoids, but also harmful toxins that cause damage to the delicate lining of the lungs, which are of major importance for anyone working on their physical fitness (hello, oxygen delivery system!).

Today’s athletes are lucky they can take advantage of the many diverse pot products on the market that are so safe even a kid could use them (with permission from their physician, of course). The popularity of vape pens has grown exponentially over the last few years, but so have cannabis-infused edibles like cookies, candies, any food really, depending on how savvy you are in the kitchen. You can also pick up potent cannabinoid-infused tinctures and oils, or creams and lotions that can be used topically for immediate and localized relief.

There’s an interesting fact about burning marijuana and burning fat that we wanted to leave you with:

While moderate exercise is good for burning off a handful of calories, a recent study in the American Journal of Medicine noted that people who regularly consume cannabis have lower fasting insulin levels than those who don’t, and that they also displayed lower insulin resistance levels and lower average waist circumferences than their non-partaking counterparts.

If you didn’t know, insulin is the hormone that tells your cells to use sugar for energy. Too much unused sugar hanging around in your body is one of the leading causes of weight gain.

Marijuana and Your Exercise Routine

Contemplating adding a little cannabis to your workout regime? Here are a few things to keep in mind:

Will turning to marijuana automatically make you a better athlete? Gosh, no – only time and lots of practice can do that. But, if you do it just right, it probably won’t make you worse, either. Experimentation is key to discovering the right dose, not to mention the right strain.

Okay, finally we’re getting to the good stuff! Marijuana was finally able to squash its negative stigma. Well, partially at least. Marijuana was very much characterized as something the cool and quirky kids did, along with the loners of the group. If you’ve ever seen The Breakfast Club (1985), you know what we’re talking about. Then, in 1998, Hunter Thompson’s book Fear and Loathing In Las Vegas was finally turned into a film. This release marked the modern portrayal of marijuana in movies.

You know those people who claim marijuana is a gateway drug? That nightmare was still alive and well in the 90s and early 2000s. As the new century dawned, marijuana and drug use in cinema split into two different directions. The first revolved around serious drug addiction with extreme mental and health consequences — see Trainspotting (1996), Requiem For A Dream (2000), Enter The Void (2009). You may never want to touch drugs ever again after watching these.

On the other hand, light-hearted movies such as The Big Lebowski and Dazed and Confused painted marijuana use as relaxing, chill, and something to do when you’re bored with no real consequences. Marijuana was suddenly comical as opposed to life-threatening. These films introduced the stoner/slacker stereotype into marijuana. Ergo, all smokers were lazy, dumb, and lacked any sort of motivation to live in the real world with 9-5 jobs.

After Colorado’s marijuana legalization in 2014, marijuana and movies were joined at the hip. You couldn’t have one without the other. What happened in Colorado really calmed audiences down. Even conservatives thought, “Hey, if the government approved it, it must not be so bad.” Movies like Saving Grace (2000), Super High Me (2007), and Pineapple Express (2008) really drive that prospective home.